by Index Investing News
in World
Reading Time: 11 mins read
A A
0
Home World
Share on FacebookShare on Twitter

DOZENS of schoolchildren were buried alive after their classrooms collapsed during a massive earthquake in Indonesia, officials said.

The death toll from the magnitude 5.6 quake in the mountains of West Java on Monday rose to 268 today as rescue workers continued to search through mountains of rubble to find survivors.

The earthquake caused devastating damage to the town of Cianjur, flattening schools, destroying roads and bridges, and burying at least one village under a landslide.

Hundreds of people have been left injured – and officials warned the death toll could still rise as residents remain trapped.

West Java’s governor Ridwan Kamil said: “The majority of those who died were children.”

He said many of the young victims were public school students who had finished their regular classes and were taking extra lessons at Islamic schools when the quake struck the island. 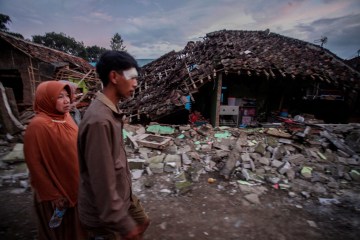 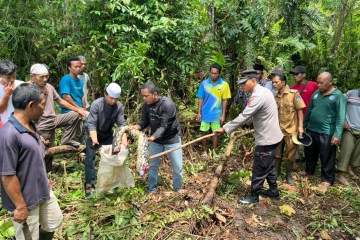 At least 151 people are still missing.

Rescue efforts have been hampered by damaged roads and bridges and power blackouts – and a lack of heavy equipment to help move the piles of heavy concrete rubble.

The earthquake sent terrified residents fleeing into the streets, some covered in blood and debris, and caused buildings around the rural area to collapse.

Hospitals have been overwhelmed, with images showing patients on stretchers and cots in tents set up outside in car parks and on the street, with intravenous drips in their arms waiting for treatment.

Henri Alfiandi, chief of the National Search and Rescue Agency, said 25 people were still buried in the village of Cijedil, northwest of Cianjur, after a landslide.

“We are maximizing operations at several points where it is suspected that there are still casualties,” he said.

“Our team is also trying to reach remote areas. For us, all victims are a priority, our goal is to find them and save lives by getting them evacuated as soon as possible and get medical help.”

Endra Atmawidjaja, the public works and housing spokesperson, said rescue workers are focusing on about a dozen locations in Cianjur, where people are still believed trapped.

“We are racing against time to rescue people,” Atmawidjaja said.

Cianjur police chief Doni Hermawan said emergency services rescued a woman and a baby from a landslide – but a third person they found tragically died from their injuries.

According to reports, eight cars were trapped by another landslide.

At a burial in a village near Cianjur, relatives of 48-year-old victim Husein, who was killed while building a house when the quake struck, wept as his body was lowered into the ground.

“I just lost a brother 10 days ago. Now I’ve lost another brother,” his sister Siti Rohmah said as she sobbed uncontrollably.

“I kept waiting, hoping he would survive and that nothing bad would happen to him.”

One of the dozens of rescuers, 34-year-old Dimas Reviansyah, said teams were using chainsaws and excavators to break through piles of felled trees and debris to find survivors.

“I haven’t slept at all since yesterday, but I must keep going because there are victims who have not been found,” he said.

Twenty-five aftershocks were recorded in two hours after the quake, according to the weather agency BMKG.

For us, all victims are a priority, our goal is to find them and save lives by getting them evacuated as soon as possible and get medical help

Henri AlfiandiChief of the National Search and Rescue Agency

President Joko Widodo also visited Cianjur on Tuesday to reassure people the government would reach those in need.

“On behalf of myself and on behalf of the government, I would like to express my deep condolences to the victims and their families in this Cianjur earthquake,” he said after visiting survivors in shelters.

He vowed to rebuild destroyed infrastructure – including the main bridge connecting Cianjur to other cities – and to provide up to 50 million rupiah ($3,180) to each resident whose house was damaged.

Roughly 175,000 people live in Cianjur, part of a mountainous district of the same name with more than 2.5 million people.

The quake struck at a shallow depth of 6.2 miles.

It also sparked panic in the greater Jakarta area – about a three hour-drive away – where high-rises swayed and office workers dashed out of their buildings.

Earthquakes occur frequently across the sprawling nation of Indonesia – but it is uncommon for them to be felt in Jakarta.

The country of more than 270 million people is often struck by earthquakes, volcanic eruptions and tsunamis due to its location on the Ring of Fire, an arc of volcanoes and fault lines in the Pacific Basin.

In February, a magnitude 6.2 earthquake killed at least 25 people and injured more than 460 in West Sumatra province.

In January 2021, a magnitude 6.2 earthquake killed more than 100 people and injured nearly 6,500 in West Sulawesi province.

And a powerful Indian Ocean quake and tsunami in 2004 killed nearly 230,000 people in a dozen countries – most of them in Indonesia.

It comes as a magnitude-7.0 earthquake rocked the nearby Solomon Islands capital of Honiara on Tuesday.

The first quake struck just off the south west coast at 1pm local time, sparking a tsunami warning – before it was stood down.

A second quake, with a magnitude of 6.0, was recorded nearby 30 minutes later.

There were no immediate reports of any deaths or injuries.

JUBA, South Sudan -- Pope Francis warned Saturday that South Sudan’s future depends on how it treats its women, as...

At least 13 dead as Chile battles dozens of raging wildfires

Dozens of raging wildfires in Chile claimed at least 13 lives and torched some 14,000 hectares, authorities reported on Friday,...

If you want a sense of how fraught US-China relations are, consider this: a balloon just derailed a diplomatic summit....

It is up to the government in Kiev to decide how to use the new rockets for the US-supplied HIMARS...

10 Wednesday AM Reads – The Large Image

How do you figure out your performance for 2022 : stocks

Germany struggles with its dependency on China