by Index Investing News
in World
Reading Time: 7 mins read
A A
1
Home World
Share on FacebookShare on Twitter

A series of revealing texts and tweets by Sam Bankman-Fried, the disgraced CEO of FTX, the once high-flying but now belly-up crypto exchange, had the following to say about his image as a do-gooder: it is a “dumb game we woke westerners play where we say all the right shibboleths and so everyone likes us.”

Very interesting. He had the whole game going: a vegan worried about climate change, supports every manner of justice (racial, social, environmental) except that which is coming for him, and shells out millions to worthy charities associated with the left. He also bought plenty of access and protection in D.C., enough to make his shady company the toast of the town.

As part of the mix, there is this thing called pandemic planning. We should know what that is by now: it means you can’t be in charge of your life because there are bad viruses out there. As bizarre as it seems, and for reasons that are still not entirely clear, favoring lockdowns, masks, and vaccine passports became part of the woke ideological stew.

This is particularly strange because covid restrictions have been proven, over and over, to harm all the groups about whom woke ideology claims to care so deeply. That includes even animal rights: who can forget the Danish mink slaughter of 2020?

Regardless, it’s just true. Masking became a symbol of being a good person, same as vaccinating, veganism, and flying into fits at the drop of a hat over climate change. None of this has much if anything to do with science or reality. It’s all tribal symbolism in the name of group political solidarity. And FTX was pretty good at it, throwing around hundreds of millions to prove the company’s loyalty to all the right causes.

Among them included the pandemic-planning racket. That’s right: there were deep connections between FTX and Covid that have been cultivated for two years. Let’s have a look.

Earlier this year, the New York Times trumpeted a study that showed no benefit at all to the use of Ivermectin. It was supposed to be definitive. The study was funded by FTX. Why? Why was a crypto exchange so interested in the debunking of repurposed drugs in order to drive governments and people into the use of patented pharmaceuticals, even those like Remdesivir that didn’t actually work? Inquiring minds would like to know. 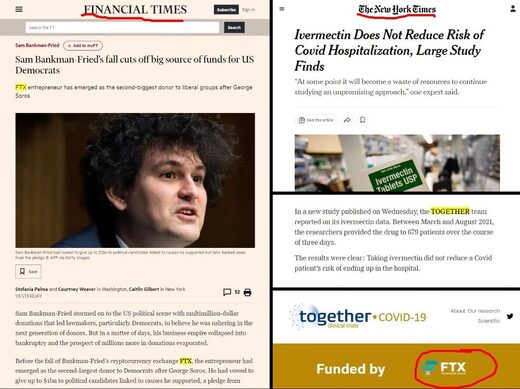 Regardless, the study and especially the conclusions turned out to be bogus. David Henderson and Charles Hooper further point out an interesting fact: “Some of the researchers involved in the TOGETHER trial had performed paid services for Pfizer, Merck, Regeneron, and AstraZeneca, all companies involved in developing COVID-19 therapeutics and vaccines that nominally compete with ivermectin.”

For some reason, SBF just knew that he was supposed to oppose repurposed drugs, though he knew nothing about the subject at all. He was glad to fund a poor study to make it true and the New York Times played its assigned role in the whole performance.

It was just the start. A soft-peddling Washington Post investigation found that Sam and his brother Gabe, who ran a hastily founded Covid nonprofit, “have spent at least $70 million since October 2021 on research projects, campaign donations and other initiatives intended to improve biosecurity and prevent the next pandemic.”

I can do no better than to quote the Washington Post:

The shock waves from FTX’s free fall have rippled across the public health world, where numerous leaders in pandemic-preparedness had received funds from FTX funders or were seeking donations.

In other words, the “public health world” wanted more chances to say: “Give me money so I can keep advocating to lock more people down!” Alas, the collapse of the exchange, which reportedly holds a mere 0.001% of the assets it once claimed to have, makes that impossible.

Among the organizations most affected is Guarding Against Pandemics, the advocacy group headed by Gabe that took out millions in ads to back the Biden administration’s push for $30 billion in funding. As Influence Watch notes: “Guarding Against Pandemics is a left-leaning advocacy group created in 2020 to support legislation that increases government investment in pandemic prevention plans.”

Truly it gets worse:

FTX-backed projects ranged from $12 million to champion a California ballot initiative to strengthen public health programs and detect emerging virus threats (amid lackluster support, the measure was punted to 2024), to investing more than $11 million on the unsuccessful congressional primary campaign of an Oregon biosecurity expert, and even a $150,000 grant to help Moncef Slaoui, scientific adviser for the Trump administration’s “Operation Warp Speed” vaccine accelerator, write his memoir.

Leaders of the FTX Future Fund, a spinoff foundation that committed more than $25 million to preventing bio-risks, resigned in an open letter last Thursday, acknowledging that some donations from the organization are on hold.

The FTX Future Fund’s commitments included $10 million to HelixNano, a biotech start-up seeking to develop a next-generation coronavirus vaccine; $250,000 to a University of Ottawa scientist researching how to eradicate viruses from plastic surfaces; and $175,000 to support a recent law school graduate’s job at the Johns Hopkins Center for Health Security. “Overall, the Future Fund was a force for good,” said Tom Inglesby, who leads the Johns Hopkins center, lamenting the fund’s collapse. “The work they were doing was really trying to get people to think long-term … to build pandemic preparedness, to diminish the risks of biological threats.”

Guarding Against Pandemics spent more than $1 million on lobbying Capitol Hill and the White House over the past year, hired at least 26 lobbyists to advocate for a still-pending bipartisan pandemic plan in Congress and other issues, and ran advertisements backing legislation that included pandemic-preparedness funding. Protect Our Future, a political action committee backed by the Bankman-Fried brothers, spent about $28 million this congressional cycle on Democratic candidates “who will be champions for pandemic prevention,” according to the group’s webpage.

I think you get the idea. This is all a racket. FTX, founded in 2019 following Biden’s announcement of his bid for the presidency, by the son of the co-founder of a major Democrat Party political action committee called Mind the Gap, was nothing but a magic-bean Ponzi scheme. It seized on the lockdowns for political, media, and academic cover. Its economic rationale was as nonexistent as its books. The first auditor to have a look has written:

“Never in my career have I seen such a complete failure of corporate controls and such a complete absence of trustworthy financial information as occurred here. From compromised systems integrity and faulty regulatory oversight abroad, to the concentration of control in the hands of a very small group of inexperienced, unsophisticated and potentially compromised individuals, this situation is unprecedented.”

It was the worst example of a phony perpetual-motion machine: a token to back a company that itself was backed by the token, which in turn was backed by nothing but political fashion and woke ideology that roped in Larry David, Tom Brady, Katy Perry, Tony Blair, and Bill Clinton to provide a cloak of legitimacy.

And you can’t make this stuff up anymore: FTX had a close relationship with the World Economic Forum and was the favored crypto exchange of the Ukrainian government. It looks for all the world like the money-laundering operation of the Democratic National Committee and the entire lockdown lobby.

I will tell you what infuriates me about these billions in fake money and deep corruptions of politics and science. For years now, my anti-lockdown friends have been hounded for being funded by supposed dark money that simply doesn’t exist. Many brave scientists, journalists, attorneys, and others gave up great careers to stand for principle, exposing the damage caused by the lockdowns, and this is how they have been treated: smeared and displaced.

Brownstone has adopted as many in this diaspora as possible for fellowships as far as the resources (real ones, contributed by caring individuals) can go. But we cannot come anywhere near what is necessary for justice, much less compete with the 8-digit funding regime of the other side.

The Great Barrington Declaration was signed at the offices of the American Institute for Economic Research, which, apparently, six years prior had received a long-spent $60,000 grant from the Koch Foundation, and thus became a “Koch-funded libertarian think tank” which supposedly discredited the GBD, even though none of the authors received a dime.

This gibberish and slander has gone on for years – at the urging of government officials! – and Brownstone itself faces much of the same nonsense, with every manner of fantasy about our supposed power, money, and influence swarming the darker realms of the social-media dudgeons. In fact, the actual Koch Foundation (probably unbeknownst to its founder) was funding the pro-lockdown work of Neil Ferguson, whose ridiculous modeling terrified the world into denying human rights to billions of people the world over.

All this time – while every type of vicious propaganda was unleashed on the world – the pro-lockdown and pro-mandate lobby, including fake scientists and fake studies, were benefiting from millions and billions thrown around by operators of a Ponzi scheme based on cheating, fraud, and $15 billion in leveraged funds that didn’t exist while its principal actors were languishing in a drug-infested $40 million villa in the Bahamas even as they preened about the virtues of “effective altruism” and their pandemic-planning machinery that has now fallen apart.

Then the New York Times, instead of decrying this criminal conspiracy for what it is, writes puff pieces on the founder and how he let his quick-growing company grow too far, too fast, and now needs mainly rest, bless his heart.

The rest of us are left with the bill for this obvious scam that implausibly links crypto and Covid. But just as the money was based on nothing but puffed air, the damage they have wrought on the world is all too real: a lost generation of kids, declined lifespans, millions missing from the workforce, a calamitous fall in public health, millions of kids in poverty due to supply-chain breakages, 19 straight months of falling real incomes, historically high increases in debt, and a dramatic fall in human morale the world over.

So yes, we should all be furious and demand full accountability at the very least. Whatever the final truth, it is likely to be far worse than even the egregious facts listed above. It’s bad enough that lockdowns wrecked life and liberty. To discover that vast support for them was funded by fraud and fakery is a deeper level of corruption that not even the most cynical among us could have imagined.

Jeffrey A. Tucker, Founder and President of the Brownstone Institute, is an economist and author. He has written 10 books, including Liberty or Lockdown, and thousands of articles in the scholarly and popular press. He writes a daily column on economics at The Epoch Times, and speaks widely on topics of economics, technology, social philosophy, and culture.

U.S. awards defense contract of over $1 billion to Lockheed Martin By Reuters