“First, I will need snacks!” Yes, me too. IFC Films has revealed an official trailer for a kooky indie comedy titled Four Samosas, made by British-Indian actor / filmmaker Ravi Kapoor. This originally premiered at the 2022 Tribeca Film Festival earlier this year, and also played at the Heartland, Newport Beach, and Raindance Film Fests; and it’s also screening at the Denver Film Festival soon, too. An unmotivated South Asian American rapper, along with three other first time thieves, plans a heist on a grocery store owned by his ex-girlfriend’s father, in order to steal her wedding diamonds and disrupt her pending engagement. Set entirely in Los Angeles’ “Little India” (see Google Maps) in a world of sari places, curry restaurants, Indian amateur-dramatic groups and South-Asian revolutionaries, Four Samosas is a love letter to all the “Little India’s” around the world, and a celebration of re-discovering your voice and finding your crew. This stars Venk Potula, Sonal Shah, Sharmita Bhattacharya, and Nirvan Patnaik. Looks like some good fun. 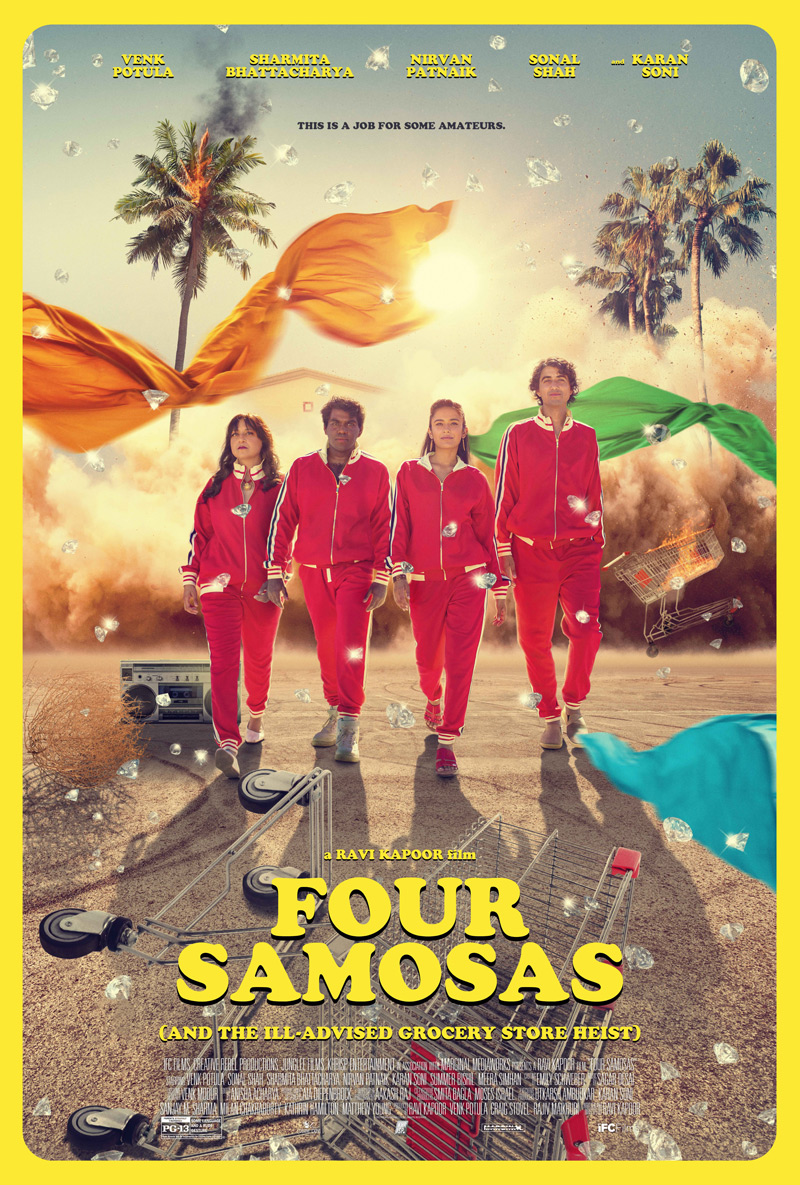 When wannabe rapper Vinny discovers that his fatalistic ex-girlfriend Rina is now engaged to a goat-shit recycler named Sanjay, Vinny decides to disrupt her future wedding by stealing her dowry diamonds from her father’s grocery store. Crewing up with an actor who longs to go to Bollywood, plus a do-gooding newspaper editor, and a malcontent immigrant engineer, Vinny and his gang somehow pull off the heist despite their obvious ineptitude. But will the theft get Vinny and Rina back together again or lead to more misery? And will Vinny ever finish a song? Four Samosas is both written and directed by British-Indian actor / filmmaker Ravi Kapoor, making his second feature film after Miss India America previously, plus a few other shorts. Produced by Ravi Kapoor, Rajiv Maikhuri, Venk Potula, and Craig Stovel. This initially premiered at the 2022 Tribeca Film Festival earlier this year. IFC Films will debut Four Samosas in select US theaters + on VOD starting December 2nd, 2022 coming soon. For more info, visit their official site.

HBO Max has cancelled DC Comics live-action series Titans and Doom Patrol after four seasons. The writing was largely on...

When Will The Housing Market Crash In Florida?

American Airlines taps insider Devon May as CFO By Reuters