How to Do a Backdoor Roth IRA in 3 Simple Steps

by Index Investing News
in Investing
Reading Time: 9 mins read
A A
0
Home Investing
Share on FacebookShare on Twitter

Back in 1997, Congress approved the Roth IRA — an alternative to the Traditional IRA that would let hard-working Americans contribute post-tax earnings so their money could grow tax-free.

But it came with a caveat — Americans earning above a certain amount couldn’t partake.

So they let out a collective sigh and kept contributing to their 401(k)s and Traditional IRAs, dreading the day Uncle Sam would take a quarter of their retirement savings.

Then, with the passing of the Tax Increase Prevention and Reconciliation Act of 2005, Congress quietly opened a “backdoor” that would let high-income earners legally sneak money into a Roth.

What Is a Backdoor Roth IRA?

A backdoor Roth is a legal tax loophole that allows high earners to keep contributing to a Roth IRA.

The trick is pretty simple:

If you haven’t brushed up on your Roth IRA income limits lately, you should know that the maximum contribution you can make starts shrinking at $130,500 and goes to $0 at $144,000.

Check this handy chart from Schwab to see your maximum contribution limit. Naturally, if you make below $130,500, you don’t need to worry about a backdoor. 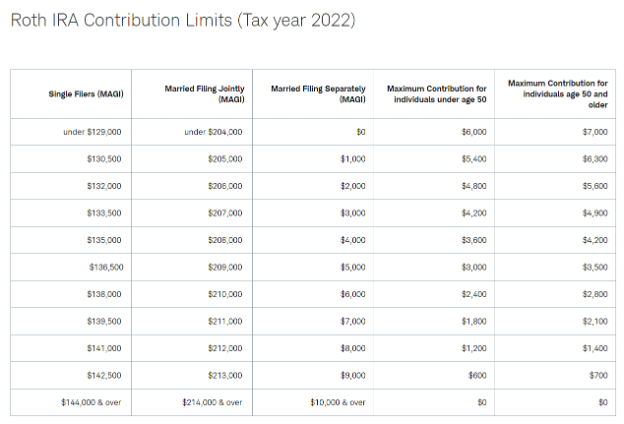 Is a Backdoor Roth IRA Legal?

Before we get ahead of ourselves, yes, backdoor Roth IRAs are 100% legal and legitimate. The IRS didn’t nab Al Capone for a backdoor Roth (it was all that other stuff).

In fact, if you read between the lines on the IRS’s retirement page, you’ll see that they basically say you can do a backdoor without spelling it out. They say that while contributions to a Roth IRA have income limits, conversions to a Roth don’t — wink wink, nudge nudge.

So while the IRS will be the ones holding the back door for you, what they won’t let you do is:

Basically, performing a backdoor Roth IRA is like ordering off the kid’s menu when you’re over 13. You’re not getting any extra food or paying any less by doing this — you’re just circumventing a requirement to get something that wasn’t designed for you.

But kids’ menus are loss leaders for restaurants, and similarly, some experts at Vox and Yale say that backdoor Roth IRAs are unethical and should be stopped. Congress is actively trying to close the loophole in the tax code that allows for backdoor Roth IRAs — a loophole they wrote into law in 2005.

In short, backdoor Roth IRAs are 100% legal, and nobody stops high-income earners from doing them. Some people may wag their fingers, but it’s such a common practice that I don’t know a single CFP who doesn’t perform several a year for their clients.

Now that we’ve covered the legal and ethical considerations, why should you bother doing one in the first place?

What Are the Benefits of a Backdoor Roth IRA?

The benefits of a backdoor Roth are the same as a regular Roth: tax-free income.

Since Roth contributions (or, in our case, conversions) are taxed upfront, the contributions grow tax-free. And since you’ve already paid Uncle Sam his due, you can withdraw your contributions at any time with no tax or penalty.

A 10% penalty does apply to any earnings you withdraw before age 59 ½.

By contrast, Traditional IRAs are tax-deferred, meaning you’ll pay taxes on earnings and contributions when you withdraw. So with a Traditional IRA, you could be hammered by taxes each year you choose to live off of retirement income.

With Roth contributions being taxed now and Traditional being taxed later, conventional wisdom would state that a Traditional IRA still makes more sense if you plan to be in a lower tax bracket in retirement (e.g. making $180,000 now but only plan to withdraw $160,000 annually in retirement).

However, due to numerous other factors, “a Roth beats a Traditional IRA — pretty much every time,” writes the National Association of Plan Advisors. And in the words of our own Kevin Mercadante, “Just about anyone who understands the benefits of a Roth IRA will want to convert their traditional IRA money to a Roth IRA if they can, but the income tax consequences of the conversion can be significant.”

More on those in a bit. But in short, earners at every income level stand to save big on taxes with a Roth, whether they go in the front door or the back.

Here’s a brief tutorial on how to pull it off.

How To Do a Backdoor Roth IRA

We have a highly detailed feature that goes through a Roth IRA conversion step-by-step.

But here’s the short version: it’s not hard to do, and the primary consideration is that by converting your Traditional IRA funds, you will trigger taxes on contributions and earnings. However, if your Traditional IRA is relatively new, you won’t have many earnings to pay taxes on.

Anyways, here are the three steps involved in pulling off a backdoor Roth IRA:

Your first step is to open a Traditional IRA and contribute funds to it.

If you already have a Traditional IRA, consider maxing it out (in 2022 that’s $6,000 for single filers under 50, $7,000 for over). Remember that your maximum annual IRA contribution combines your Traditional and Roth amounts, so you can’t put $6,000 in both.

You can open a Traditional IRA through most brokerage platforms. And at this stage, picking out assets isn’t important since you’ll be converting the funds to a separate Roth account anyhow.

2. Immediately Convert Your Traditional IRA to a Roth IRA.

To preface, you want to convert your Traditional to a Roth ASAP because you don’t want your Traditional IRA to start generating taxable earnings. You want those earnings to grow tax-free, which is why we’re doing the backdoor Roth in the first place.

Now, there are three ways you can convert a Traditional to a Roth:

3. Rinse and Repeat Each Year (Until the Loophole Closes).

One minor drawback to backdoor Roth IRAs is that they’re tedious. You’ll have to keep doing backdoors every single tax year as long as you earn above the income threshold for direct contributions.

Luckily, most CFPs can do backdoors in their sleep, so it’s not that big of a deal. Nor is it much work on your end. You just have to remember to do it and to fill your Roth coffers before Congress seals the backdoor permanently.

So, all things considered, is a backdoor Roth IRA a no-brainer? Or are there drawbacks to consider?

Should I Do a Backdoor Roth IRA?

Talk to your CFP. They can advise you based on your income, finances, and retirement goals.

But in general, you might want to consider a backdoor Roth IRA if you:

Again, your CFP is best-suited to help determine if a backdoor Roth IRA makes sense and can help you through the process.

A Mega Backdoor also requires you to have either an employer-sponsored or a solo 401(k), permitting after-tax contributions and in-service withdrawals.

Here’s how it works:

The Mega Backdoor Roth IRA requires a lot of retirement savings, as you can only roll over any amount you invest beyond your $20,500 pre-tax 401(k) contributions.

There are also other steps, caveats, and potential drawbacks to consider. But if you can pull it off, you can fill up a Roth even faster.

Read more >>> Your Guide to the Mega Backdoor Roth IRA

The backdoor Roth IRA is a quirky tax loophole that most high-income earners should take advantage of. Congress may one day lock the back door, so it behooves everyone making over $130,500 to stash as much cash in a Roth as possible so that some of their retirement income can grow tax-free.

Mortgage Demand Down Up To 88% From This Time Last Year

3 Investing Mistakes You Don’t Want To Make In 2023

In this article This article is presented by Kiavi. Read our editorial guidelines for more information. From skyrocketing interest rates to market...

Defined contribution (DC) plans, among other retirement savings vehicles, are the most common ways that US workers save for retirement....

Who is this Form for & How to Fill It

The Real Estate Investing Hurdle You MUST Get Over

Knowing how to find real estate deals can be challenging for new and experienced investors. For those who want to...

Mortgage Demand Down Up To 88% From This Time Last Year

Congress prepares to take up bill to avoid rail strike

How Some Dad and mom Modified Their Politics within the Pandemic