by Index Investing News
in Markets
Reading Time: 8 mins read
A A
0
Home Markets
Share on FacebookShare on Twitter

Why must I chase the CAT?

And how in the world does this cat always manage to land on its feet? Something to do with those nine lives, I’d imagine. Anyway…

Last quarter, the heavy equipment-maker shrugged off supply chain hiccups … took rising raw materials costs in stride … and spat in the face of all that economic uncertainty that everyone else is blaming. Patooey!

Caterpillar raised prices for its recognizable bright-yellow machines, and equipment sales still took off like a shot. Revenue rose from $12.4 billion to an even $15 billion, piledriving analysts’ expectations for $14.4 billion in sales.

The increase in sales volume was driven by the impact from changes in dealer inventories, higher sales of equipment to end users and higher services.

Let’s talk about those end users, shall we?

Caterpillar dealers — my mother warned me about them — are stocking up on ‘dozers and diggers by the dozen. These machines are going out to work in every industry from construction to mining to oil.

Put another way: If industrial companies are expecting more work … they’re gonna need more machines … from Caterpillar dealers, specifically. There’s a reason why CAT stock is often looked to as an economic bellwether — a gauge on industrial health nationwide.

So while basically every other economic indicator is flashing red and sounding the alarm … industrial customers and investors alike are still chasing the CAT. Make of that what you will.

CAT stock shot up 10% on the news in its biggest post-earnings rally in decades.

Of course, Caterpillar was far from the only stock reporting today … we’ve got literally hundreds and hundreds of companies on the docket today.

We’re not diving into each and every report today, mind you … but you still might want to grab a snack anyway as we unwrap the earnings action.

What can I say? It’s the most wonderful time of the year — er, earnings season.

Don’t you start caroling yet, Great Stuff. Let me get through Halloween first.

Now let’s see what else the CAT dragged in … after a quick word from our sponsors, of course.

See, Wall Street insiders and hedge fund managers have been using this options trading strategy for YEARS to become “lazy landlords” … collecting money that other investors leave on the table.

When you click here, Mike Carr will show you how you can get “paid to trade” in his all-new, on-demand Options Master Class.

It completely demystifies options — for new and improving traders alike.

With this options trading strategy, you could even collect several paychecks per month!

Get full access to Mike Carr’s Options Master Class at an incredible price for a limited time only. 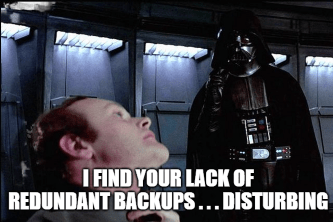 Seagate’s (Nasdaq: STX) earnings warning back in August was the tick-tick-ticking start of destruction for hard drive makers … and Western Digital’s (Nasdaq: WDC) report screamed into the earnings confessional like a drive out of hell.

I can already hear it now … the ghastly sound of data loss. Oh, and investors weeping.

That’s right: Western Digital’s revenue crashed 26% last quarter to $3.74 billion, yet that still came in above analysts’ targets for $3.59 billion. Getting déjà vu yet?

Western Digital wasn’t as lucky on the earnings front though: Earnings per share dropped from $2.49 last year to $0.20, missing estimates for $0.38 by a long shot.

But could things possibly get worse? Why, yes, of course they can: Western Digital expects both earnings and revenue to drop this quarter … and you best believe the company’s guidance fell far short of Wall Street’s own expectations.

So what’s with the never-ending pessimism from Western Digital today? What gives?

The company specifically pointed to a “consumer-led downturn” for slouching hard drive sales.

Plus, Seagate had reported a decrease in purchases by commercial cloud operators, which doesn’t bode well for Western Digital either… After all, that “cloud” you’re loading your junk on to is just someone else’s hard drive.

WDC shares sank 2% on the news. 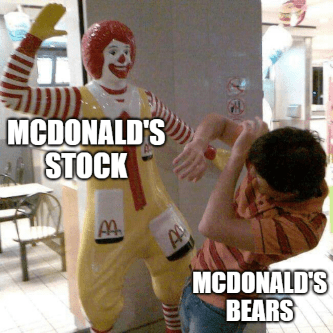 Double-beat report? With cheese? And fries?

For what it’s worth, more than a few McDonald’s (NYSE: MCD) customers must’ve had better luck than yours truly when getting their Macca’s sundaes this quarter. (Curse you, Ronald, and your creepy clown grin.)

The Golden Arches reported a 9.5% uptick in global sales — way above the 5.8% growth that analysts expected. All told, revenue reached $5.87 billion and handily beat expectations for $5.7 billion.

Dang, that’s a lotta McNuggets. Hope they didn’t forget the sauce this time…

Earnings came in at a healthy $2.68 per share, beating estimates for $2.58 per share. And that’s probably the last time we’re going to call anything related to McDonald’s “healthy.”

Wall Street was willing to overlook the fact that both earnings and revenue are down year over year, instead sending MCD shares up 3% today. But that’s a lucky break, considering how Mr. Market treated other stocks who reported their own beats…

Sleep Is A Numbers Game 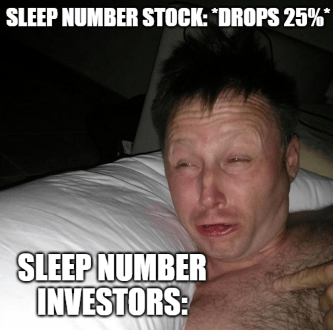 The mattress-maker just showed that, yes, you can beat expectations on all fronts … but that doesn’t mean Wall Street has to like it.

Earnings came in at $0.22 per share, which was way ahead of the consensus estimate for $0.06 per share. Still, compared to the $2.22 per share that Sleep Number made this time last year, that beat doesn’t look all that impressive.

Things get even worse when you look at revenue, which fell from $640.4 million last year to $540.6 million last quarter. Wall Street low-ballers had only expected $529.3 million … but if the market’s going to send SNBR shares plummeting 25% on those numbers … maybe they should’ve expected a bit more from Sleep Number is all I’m saying.

So you’ve got a double-beat report? That don’t impress me much…

Lots of Shania Twain in these pages recently. You alright, Great Stuff?

As for why a mattress-maker would ever need chips to make its mattresses, well, that’s what you get for building “smart beds.” Not so smart are they now, huh?

Let Me Play You The World’s Smallest Virtual Violin 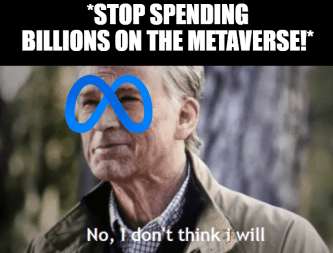 And now, our slot of shame…

Meta’s (Nasdaq: META) earnings are in the books, and oh, what earnings those earnings were… Let’s take a look at the destruction by the numbers, shall we?

Thanks to deteriorating ad spending, revenue dropped for the second straight quarter — down 4% to $27.7 billion, but still beating estimates for $27.4 billion. Earnings per share totaled $1.64, missing estimates for $1.87.

Digging in further, we can see that the Facebook parent’s profits crashed 52%, thanks to higher headcount expenses and rising losses in the virtual/augmented reality/meta biz.

Despite institutional investors pleading with Meta to spend less on the metaverse, cut headcount expenses and focus on its ailing social media platforms … Zuckerberg is still going full steam ahead into the great meta beyond.

Next quarter’s guidance? More of the same.

Pssh, you think Zuckerberg would admit defeat in the metaverse as long as Meta’s still solvent? After literally renaming the company after its metaverse fantasies? Oh, Zuck can’t go for that. Noooo. No can do.

And then came the downgrades.

Morgan Stanley Analyst Brian Nowak downgraded META stock, cutting his price target from $205 to $105, all because of the Zuck’s unsustainable spending spree.

John Blackledge over at Cowen also downgraded the stock, dropping his price target from $205 to $135 … slightly more optimistic than Morgan Stanley.

(Side note: “John Blackledge” totally sounds like the name of a spy, and nothing can convince me otherwise. That’s awesome. Blackledge, John Blackledge … with a license to downgrade.)

Anyway … META stock crashed 24% on the news, bringing the shares down to 2016 levels. Oof.

Did you tune in to the Big Tech reports this week, Great Ones? Did you expect Meta to sell off as much as it did? What earnings are you looking forward to most?

Write to us whenever the market muse calls to you! [email protected] is where you can reach us best.

Until next time, stay Great!

Southwest to reiterate confidence in flight network after December debacle

5/5 © Reuters. A F-35B aircraft from the U.S. Air Force refuels during the annual Red Flag military exercise between...

How to Evaluate the Worth of a Business

This week, Jaclyn, the Chief Engagement Editor on our Alpha team asked… “Charles — I know you say your approach...

Uber Technologies, Inc. (NYSE: UBER) reported a decline in net profit for the fourth quarter of 2022 when the ride-hailing...

Why the US needs a ban on ASAT missile testing

The Power Of Mindset And How To Leverage It For Success

The Personal Capital Wealth Equation, Half 1: The Controls Variable