Bitcoin’s hashrate has hit a new all-time high of 331EH/s, according to data from Glassnode. Historically there has been a loose correlation between hashrate and Bitcoin’s price spurring debate as to whether hashrate follows price or vice versa. 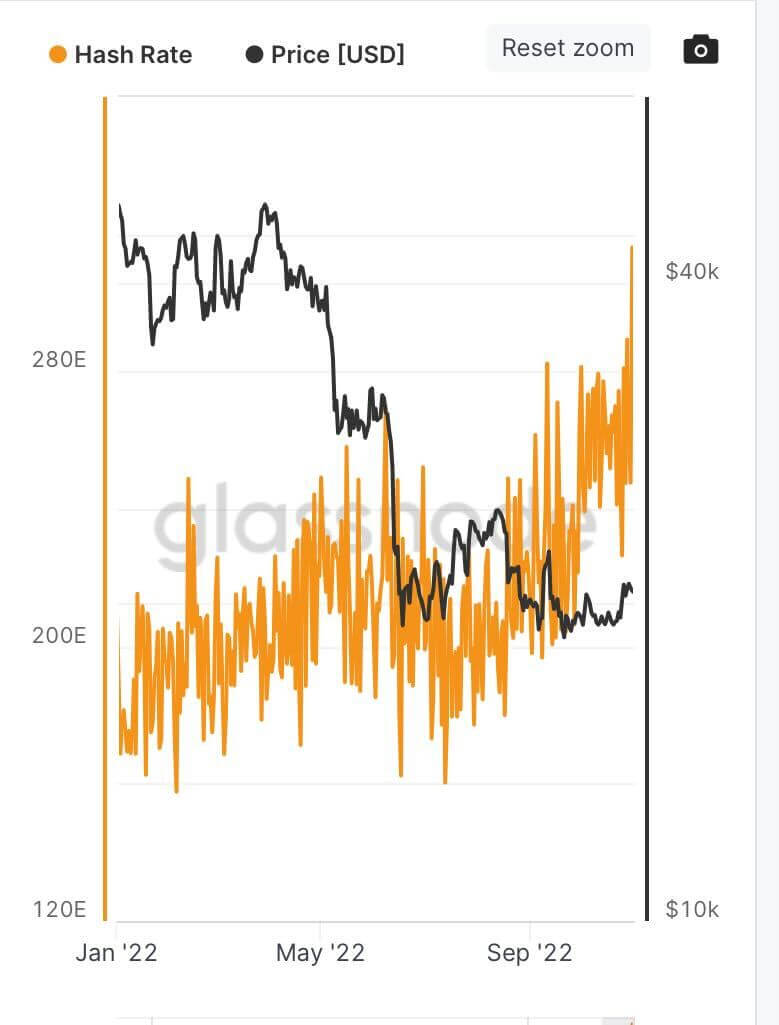 The spike in hashrate comes at a difficult time for miners as some struggle to meet debt payments following Bitcoin’s 70% drawdown from $69k. Further, research conducted by CryptoSlate indicates that there could be further capitulation.

Should the increasing hashrate increase trend continue without a further leg up in price, a second capitulation could occur as miners sell their Bitcoin. A similar situation occurred in June when miners sold roughly 20,000 BTC.

The upside to an ever-increasing hashrate is the possibility of a 51% attack on the network decreases. With a hashrate of 313EH/s, an attacker would need roughly 1.9 million Antminer KA3 (166Th) miners.

In 2018 it would have cost just $1.4 billion to conduct a 51% attack on bitcoin when the cost to mine 1BTC was just $8,000. Today the hashrate has increased by 900%, and therefore the network is that much more secure. Even in 2018, a bad actor would have needed  2.4 million top-of-the-range ASIC miners to perform the attack.

However, while the increase in hashrate has made the network more secure, it also results in higher costs for mining Bitcoin. A higher hashrate means a higher network difficulty and, thus, a reduction in the BTC generated per kW of energy.

However, investment in Bitcoin mining shows little sign of slowing down. Several mining companies, such as CleanSpark, are seeking new investors as they purchased 3,83 miners from Argo. Riot broke ground at a new 1GW mining facility, Great American Mining was acquired by Crusoe Energy, and Compass Mining signed a deal on a new 27MW mining center.

While the short-term picture may be ominous for Bitcoin miners, there is little evidence of long-term bearish sentiment.

Get an Edge on the Crypto Market 👇

How to take back our identities in a Web3 world

Paraguayan mining companies are taking a hit to their profitability due to the steep power fee hikes the government has...

Equity markets continued their uneven climb upward this year with the tech-heavy Nasdaq and the S&P 500, which has a...

Crypto proponents would be wise to keep their eyes on nonfungible token (NFT) and metaverse trademark applications this year, which...

BTC/USD Looks For A Direction; Will $24k Come to Focus?

Join Our Telegram channel to stay up to date on breaking news coverage The Bitcoin price prediction gains 0.49% as...

Eric Adams must focus on promise of cracking down on crime, not migrants