by Index Investing News
in Economy
Reading Time: 5 mins read
A A
0
Home Economy
Share on FacebookShare on Twitter

At a shopping mall near Clackamas, Oregon, a new recruitment centre is trying to sign up workers for a Warren Buffett-owned company that makes jet engine parts.

Two years after Precision Castparts laid off 40 per cent of its workers in response to a coronavirus pandemic-induced collapse in aeroplane demand, the company is back in hiring mode. It is making too few castings and forgings for engine makers, which in turn are struggling to satisfy the demands of the world’s biggest plane makers, Airbus and Boeing.

A lack of workers at the Berkshire Hathaway subsidiary is but one factor fuelling a global shortage of engines and the high-precision parts needed to make them, which is hampering the recovery of the global aviation industry just as passengers flock back to air travel.

“When the business downturns, the easiest call to make is to cut heads with no thought at all as to what I’m losing,” said Dave Coates, a former human resources manager at Precision Castparts who retired last year.

The attempt to attract recruits would not improve production any time soon, Coates added, given that it takes up to three years for production line workers to hone their skills.

Persistent supply chain disruptions were on display during recent third-quarter earnings updates from aerospace and defence companies, which were described as “a ride on the struggle bus” by Rob Spingarn, analyst at Melius Research.

Although shortages of parts and workers had “modestly improved”, Spingarn wrote in a note to clients, “it still seems that most companies are playing whack-a-mole”, leading to delayed sales and higher costs.

Boeing’s top executives told investors last week that a paucity of engines was the main thing preventing it from delivering much more than 20 of its 737 Max planes each month — even though airlines are clamouring for them.

The jet maker said production would speed up late next year and promised more details at Wednesday’s investor conference, which is seen as a test of the company’s ability to restore credibility with Wall Street in the wake of two fatal Max crashes.

“I am confident the industry will step up,” chief executive David Calhoun said last week. “But it will take more time than I probably had hoped.”

The situation at Airbus has improved since the summer, when chief executive Guillaume Faury said the company still had 26 “gliders”, newly built planes without engines. Now the number sits at fewer than 10.

But Faury said he expected the supply chain bottlenecks, which forced Airbus to scale back plans to increase production of the A320 family, to last well into next year.

Deliveries of Leap engines made by CFM International, a joint venture between France’s Safran and the US’s GE Aviation, are still behind schedule, executives said last month. The Leap engine powers Boeing’s 737 Max and is also an option for Airbus’s A320neo jets. Shipments rose to 347 in the third quarter, up 54 per cent on the previous three-month period but still lower than originally planned.

CFM had not yet made up for delays and was still “struggling on castings, especially in the US”, said Safran’s chief executive Olivier Andriès.

Castings are made by pouring molten metal into moulds to form parts such as engine blades and “structural” elements that hold an engine together. The process is difficult to master. Even experienced workers can be forced to throw away 5 per cent of a production run, and for newer products, the proportion can be as much as half.

Indy Rattu, vice-president for European operations at UK-based Doncasters, said the high levels of qualification and certification needed in the industry were a challenge.

The high-precision manufacturer, which traces its roots to the city of Sheffield in 1778, makes blades and structural castings for engine makers. But it has found that some of its suppliers either did not survive the pandemic or are struggling to source materials and parts.

Although the number of suppliers that folded was relatively small, Rattu said that “many are qualified for very specific products, so when they disappear . . . it makes the job of finding an alternative extremely challenging”.

Ron Epstein, analyst at Bank of America, said: “Aerospace has had, on average, an older workforce. If you accelerated your retirement because of Covid, a lot of those folks are just gone. And it’s highly skilled labour. You can’t just take someone off the street and have someone do this.”

Companies are also reluctant to start making castings and forgings because the list of potential customers is limited, added Epstein, unlike, for instance, the auto industry.

The next six months will be critical as the industry navigates the recovery at a time of persistently high inflation. 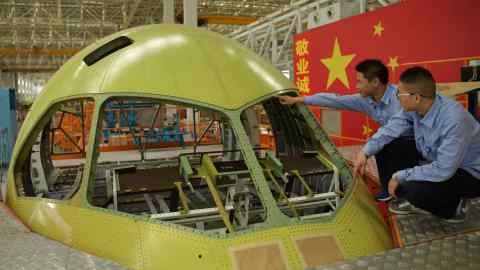 A push by Boeing and Airbus to boost production will continue to put strain on the inherently tricky relationship with their suppliers. There is always “tension” between the two, said Nick Cunningham, analyst at Agency Partners in London.

“The airframers can probably often add more capacity by hiring some more assembly labour and working more shifts, but the suppliers may need to add hard tooling and skilled people and don’t want to invest big dollars to meet a brief peak in demand.”

Frank Perryman, chief executive of a privately held titanium mill in Pittsburgh that sells metal products to parts makers, said aerospace suppliers had reduced headcount and needed to see more orders before stepping up recruitment. “You can’t slow the world down and expect it to speed back overnight.”

Dealing with antisocial behaviour must be made a priority in attempts to boost growth in “left-behind” areas, according to a...

This article is an on-site version of our Disrupted Times newsletter. Sign up here to get the newsletter sent straight...

From Here to Serenity: How Public Choice Makes Me Less Cynical

After James M. Buchanan won the Nobel Prize, some people suggested public choice was too obvious for a Nobel. To...

In the neoclassical economic model, agents are assumed to act in pursuit of maximum utility—to know their preferences and some...

How to Gift Crypto This Holiday Season: 3 Easiest Ways

Stock Based Compensation: A List Of The Worst Offenders And A Few Of The Best