Netflix has unveiled the first look teaser trailer for a new series arriving in January 2023 titled Lockwood & Co., made by the acclaimed UK filmmaker Joe Cornish (director of Attack the Block and The Kid Who Would Be King). This is based on a book series that involves a ghost-hunters group called Lockwood & Co. – a small agency in London that runs independent of any adult supervision. A tiny startup, run by two teenage boys and a newly arrived, supremely psychically gifted girl, a renegade trio destined to unravel a mystery that will change the course of history. This is only the first of many books in this series, so if this does well expect to see more of these ghost hunters. This stars Ruby Stokes as Lucy Carlyle, Cameron Chapman as Anthony Lockwood, Ali Hadji-Heshmati as George Karim, plus Ivanno Jeremiah, Jack Bandeira, Morven Christie, Rhianna Dorris, and Paddy Holland. This pretty much seems like Ghostbusters + Harry Potter. The teaser is only a 90 sec clip but the ghost looks freaky. What’s up with his magical sword? 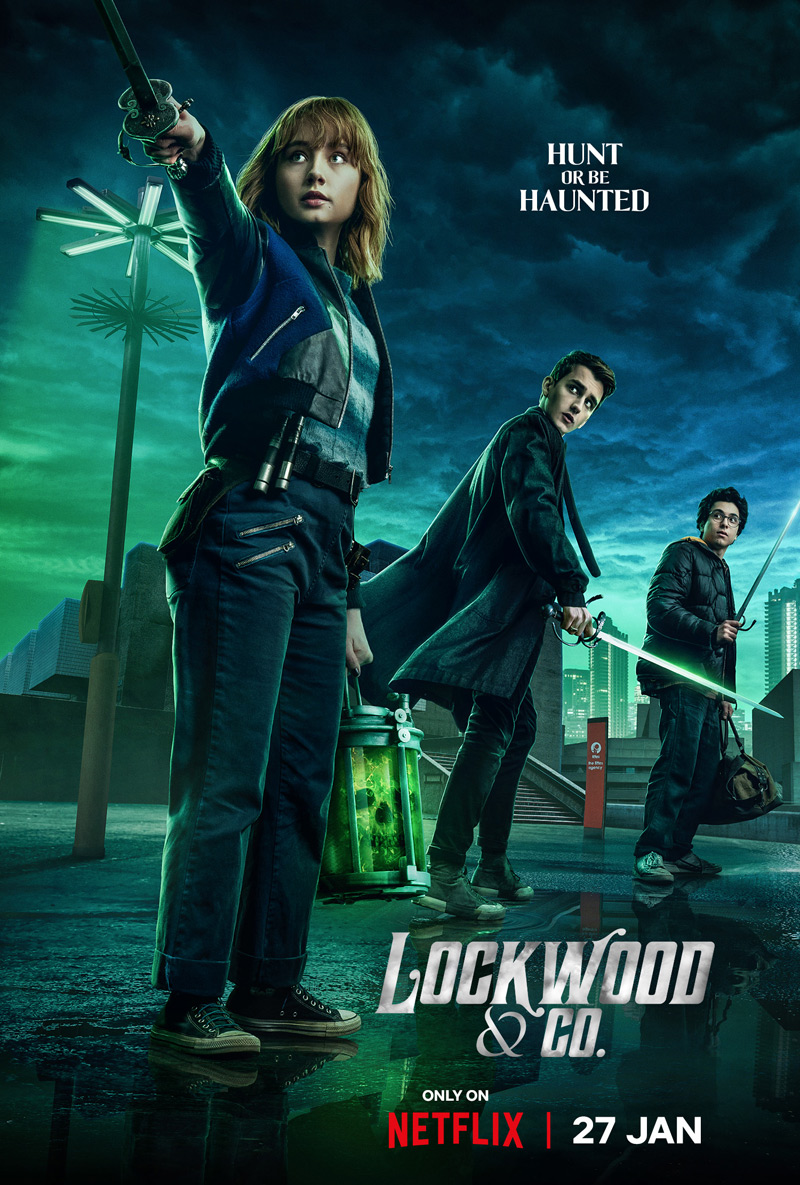 In a world plagued by ghosts, where giant corporations employ psychic teens to battle the supernatural, only one company operates without adult supervision, and its name is Lockwood & Co. Run by Anthony Lockwood, a rebellious young entrepreneur haunted by his mysterious past, his brilliant but eccentric sidekick George and a newly arrived, supremely gifted girl called Lucy, this renegade trio are about to unravel a terrifying mystery that will change the course of history. Lockwood & Co. is a series created and showrun by British writer / filmmaker Joe Cornish, director of the movies Attack the Block and The Kid Who Would Be King previously, plus some TV work (on “Comedy Lab”, “Blunder”) and many other writing gigs. Adapted from the novel by Jonathan Stroud. With writing by Joy Wilkinson, Ed Hime, and Kara Smith. Featuring episodes directed by Joe Cornish, William McGregor, and Catherine Morshead. It’s executive produced by Nira Park, Rachael Prior, and Joe Cornish. Netflix debuts the Lockwood & Co. series streaming on Netflix starting January 27th, 2023 early next year. First impression? Who wants to watch this one?

Tory Burch Put Hundreds of New Styles On Sale: Shop The Best Designer Deals Up to 50% Off

Tory Burch Put Hundreds of New Styles On Sale: Shop The Best Designer Deals Up to 50% Off | Entertainment...

Toy Story, Frozen & Zootopia sequels are in the works at Disney

Disney CEO Bob Iger announces during the company’s quarterly earnings call that sequels to Toy Story, Frozen, and Zootopia are...

A Mathematical Analysis of the Most 1980s Movie Ever Made

Highway to the DATA zone. By Meg Shields · Published on February 8th, 2023 Welcome to The Queue — your daily distraction...

The BFI today announced that it will hand out $16m (£14m) of National Lottery ‘good cause’ funding over three years...

The Rise of Atlanta

Leeds: Transfer for Camara falls by way of

Ryan Holiday on Discipline Is Destiny

Saying No (Again) to Wage and Price Controls